One day when faced with the annual glut of courgettes I turned to Claudia Roden's  A Book of Middle Eastern Food which has two courgette omelette recipes. The North African eggah is not at all like a dainty French omelette in which the egg is hardly more than shown to the pan - the egg is cooked for at least 20 minutes and the result is more like a cake. The egg is just a support for the vegetables, or meat, or chicken and noodles, or whatever you have used for the filling. It is usually cooked on the hob in a covered frying pan but may also be baked in the oven. It can be served hot cut into wedges as a light supper dish, or the more substantial ones as a full main course, or cold (ideal picnic food), or cubed on cocktail sticks as a starter.

The simplest eggah consists of a lightly cooked fresh vegetable (broad beans, spinach, courgette, aubergine, leek, broccoli) - about 12 ounces / 350 grammes to 6 eggs, seasoning and butter, with perhaps a sprinkling of chopped fresh herbs as a garnish. Depending on the capacity of your pan and of your diners, you can up the veg and the eggs - it will just take a little longer to cook. We have a plentiful supply of fresh free-range eggs locally (e.g. from the Limouzin Frères market stall).

Prepare and lightly cook the vegetable. This time I had some freshly picked broad beans from the potager which I podded and blanched in boiling water for 15 minutes and, no, I didn't peel them! Good grief, life's too short. For an aubergine eggah, slice, cube, salt, drain, wipe and fry with a little chopped onion and garlic until soft. Courgette eggah - slice and boil, or fry as with aubergine. Et cetera - you get the picture. Or you could defrost a package from the freezer and cook it.

Melt the butter in the pan, mix the eggs into the vegetable and season. Pour the mixture in the pan, stir around to make sure the veg is evenly distributed, cover (with a plate if your pan doesn't come with a lid) and cook for about 15 minutes on very low heat, until the eggah is firm on the top. Make sure it is free to move and loosen it with a nylon spatula if necessary. Slide the eggah onto a plate (or the lid of your Jamie Oliver skillet), invert the pan over it (it will have drunk the butter) and turn the whole lot over, thereby enabling you to brown the underside for a further 5 minutes. Serve with a fresh green salad. It's very comforting on a cold miserable day like today!

Inspired today by an entry on Days on the Claise to look a little further into the various species of salad green that most English-speaking people refer to as "lettuce" - a leafy, sometimes slightly bitter green vegetable used mainly raw in green salads, but sometimes cooked. I used to wonder at school what happened to the hearts as I chomped my way through lunchtime sheets of clammy green raincoat - that was before the days of supermarkets and their pristine displays of hearts. It's no consolation to find out that the outer leaves are even richer in beta-carotene than the heart.


Westerners waste up to 50% of the food they buy and a lot of that is lettuce, with good intentions turning rapidly into brown sludge. Every year, according to Green Oak Buzz, 860,000 tonnes of fresh fruit and vegetables, £1.4 million worth, goes to waste in the UK... By contrast, French salades from the market keep nearly as well as home-grown, and the coarsest outer leaves are snapped up by the chickens, or vanish into the compost heap.

There are three members of the aster family widely eaten as salade.  All three have been part of the human diet since at least the times of the Pharaohs and probably much longer.

Lettuce (lactuca sativa), or laitue, is a quick-growing annual with yellowish green flowers. It comes as roundhead or cabbage lettuce, crisphead or Batavia (iceberg), cos (aka romaine) and loose-leaf (cut-and-come-again) types and many old French varieties are available mail-order e.g. from Simpsons Seeds in the UK or Baumaux in France. We grow a red-leafed mini-cos variety called Pandero, a Gardening Which 'best buy' for flavour and all-round quality. We are just about to sow some more while the maximum daytime temperature is below 25C, because high temperatures deter germination in lettuces.

In ancient Egypt, lettuce was sacred to the fertility god Min and considered to be a powerful aphrodisiac. A nice row of cos-type lettuces features on an Egyptian wall relief dating back to about 4500 BCE. Min has obviously sampled his own produce! 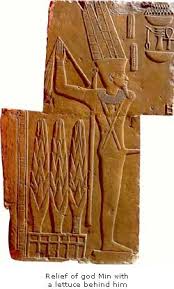 The Romans, by contrast, believed that lettuce promoted morality, temperance and chastity!

Endive (Cichorium endivia) is an annual or biennial with deeply cut leaves. It is sometimes called curly endive and frisée in the UK and is known in the USA as Chicory and in France as chicorée frisée. Beware - there are also frizzy lettuce varieties such as Salad Bowl. On the market stall it is difficult to distinguish curly endive from lettuce just by looking at it. I find endive rather tough going, personally, and I'll stick with Salad Bowl.


Then there's chicory, cichorium intybus, a blue-flowered European native perennial known in France as endive and often sold as blanched buds called chicons or witloof. Easy to remember, yes? Radicchio is an Italian chicory with many colourful varieties. Radicchio and frisée frequently turn up in supermarket mixed salads, probably because they do not crush as easily as the more tender lettuces. Chicory is one of the "bitter herbs" that form part of the Passover meal.
Posted by Pollygarter at 09:00 2 comments:

Yesterday I harvested our crop of "Jermor" shallots, which survived minus 20 Centigrade this winter apparently unharmed, in fact quite an improvement on last year. Shallots make wonderful sauces. For those who love onion gravy (British cuisine at its best) there just ain't no onion gravy like shallot gravy. Shallots are a relatively unusual vegetable in the UK and therefore expensive - hence an ideal vegetable to grow on allotments (as opposed to cabbage, cabbage, cabbage). I've grown Jermor for about ten years, first on the allotment in Leeds and then in the potager in France, plus a few in the flower border, where the spout of blue-green leaves is spectacular.

Jermor is a French demi-longue variety, which is to say a good bulb is flask-shaped, rather like an Orangina bottle in miniature. There are also cuisse de poulet (chicken thigh) and ronde (round) shallots, with golden or red skins. I am also growing Red Sun, a round red-skinned Dutch variety, planted in Spring and not a long way behind the Jermor. I've tried growing shallots from seed, but sets (baby shallots) are much more reliable. Wherever you buy them, France, England, Germany, Holland... Jermor sets are produced in France and Red Sun are Dutch in origin.

What a pleasure it is to see shallots, onions and garlic standing on lovely healthy roots. Our allotment soil, used by generations of gardeners since 1896, was contaminated by the spores of onion white rot. This fungus destroys the roots and base of the bulb, causing it to go brown, soft and slimy. Sometimes over 80% of the crop would be affected and unusable, and some of our fellow allotmenteers gave up growing onions because of it. The first signs of attack is drooping, flaccid leaves. When you pull up the bulb you can often see white fungal fluff around the base. The spores can live in the soil for at least 20 years, so we don't want it! The only thing we can do to prevent contamination is to buy authentic high-quality sets - never plant shallots or garlic from the supermarket shelf!

The harvest is now drying on recycled bread delivery trays in the hangar (out of the rain). Some - the smallest and the less attractive - will be turned immediately into shallot confiture, the recipe for which I blogged about here. The most unusual specimen is a pair of rather spindly bulbs from the edge of the bed stitched together by a stolon of couch grass (twitch grass) or I should be calling it chiendent.