Just a few pumpkins then... 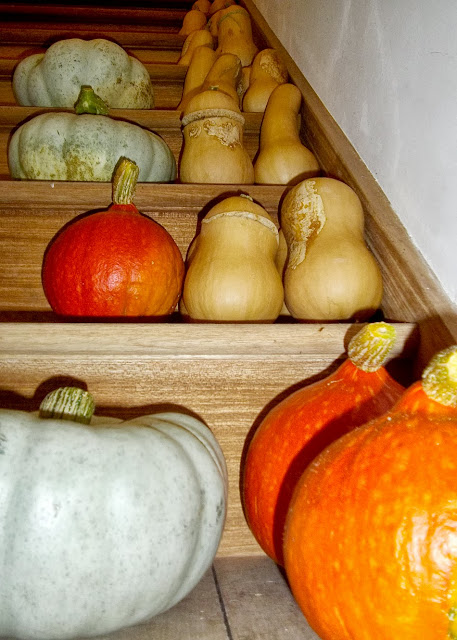 Sunday 29th... Meteo60 promised us rain all day, more or less heavy.
After a dry, fairly overcast but not unpleasant morning with Pauline stringing onions in the hangar while Tim submitted the freezer to a long overdue triage and turned the results into a vast curry, a sudden decision was made to harvest the pumpkins.

Our method of growing pumpkins developed by accident on our allotment, when a long strip of ground that had held raspberries became overgrown. We cut down the growth and laid it along the strip, covering it with black polythene to help it rot down and prevent regrowth. Tim then added all the raked up strimmings from the three allotments we had [one was only fruit!]. Come next June we cut holes in the polythene to find a good layer of compost in which we planted the pumpkins - and other members of the family cucurbitae such as courgettes. They grew like billy-oh and produced a wonderful harvest. The polythene absorbs the sun's heat and keeps the roots warm, suppressing weeds at the same time. We learned quickly that we needed to mark the position of the planting holes with canes so we could water in the right place.


This system has evolved into "the maggot", which is built during the summer mainly from mowings out of the orchard and potager areas. This is covered in spring with three large tarpaulins roped together and pinned down with rocks. The tarpaulins have hatches cut in them where the plants go. At planting time the holes are filled with a mixture of compost and sieved soil, dosed with pelleted chicken manure then in goes the plant, with a cane to mark its place. The tarpaulin is then covered in further mowings to protect it from the sun and to give the fruit something to rest on.

Pumpkins need room to grow... the maggot is 14 metres by 3 metres...
the pale leaves near the top end are the Red Kuri...
it has sent one runner down as far as the Yellow Crookneck...
and back up as far as the melons which are right at the far end...
a total length of around 20 metres!
The Crown Prince [the large dark leaves at the top end]...
has completely covered the nine square metre area between the Red Kuri and the Melons...
and had to be guided back on to the maggot almost daily!!

This year the plantings were:
Grown from seed:

We have been harvesting cucumbers, courgettes and crooknecks all summer, and blogged about them here and here. Iceball is an excellent courgette, very like Rond de Nice but paler, earlier and more productive. The melons didn't really get going until late August, Troubadour being earlier, richer in flavour and producing more fruit.

The Patidou struggled but survived to produce two fruit, still immature so we left them a little longer. I am now certain Patidous are what I have tried growing in the past without much success: Sweet Dumpling. It has a creamy skin with dark green stripes - very attractive.

The Crown Prince excelled itself, producing no less than 8 fruits with a combined weight just over 28 kilos. The root looked like the claw of a monstrous bird, possibly a roc.

There was some speculation over what would have resulted had we restricted the plant to one fruit - a pumpkin we couldn't lift?

The Red Kuri produced almost as big a plant, but only three fruit, averaging at a kilo and a half. The fruits are indeed onion-shaped, deep orange flecked with cream. This Japanese derivative of the French potimarron is not a keeper, but has a rich chestnutty flavour. When we have grown it before, it was the earliest to ripen, but not this one. [Small ones work wonderfully for individual Hoofearnlywhittingstall Pumpkin Soup]


So far we have harvested 16 fruits from each of the two varieties of Butternut squash, a total of 27 kilos in weight. Hunter and Harrier are part of a series developed for growing in British conditions and named after military aircraft  (yes, Hawk and Hercules as well). There is no difference that I can discern between the two varieties, neither in appearance, size, flavour or keeping quality. However the Hunters have gone bonkers and produced a second flush of fruits which are swelling nicely - normally, late fruits get rejected and rot off. It's as though the plants have decided that their first flush is ripe and they have time and energy to have another go.
You might guess that we love Butternut squash! 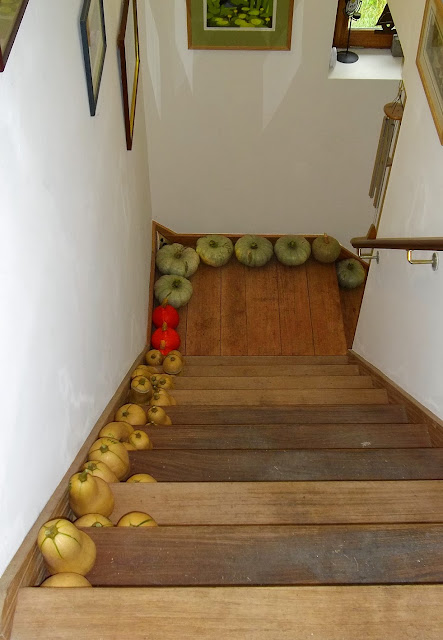 Great crop. Thanks. Now We know how to grow them... Our Butternut plants are still the same size as when we planted them... Perhaps we can over winter them!!!!!

Hello -- can I put my hand up for a butternut or a piece of crown prince? Only if you have spare of course. I'll swap you some apples if you want some.

@Colin & Elizabeth - I'd recommend planting them out later rather than sooner - late May is good enough. And the H series are great - we get them by mail order. @Susan - there's already a little butternut with your name on it! P.