The Spice Rack's back!

In our house in Leeds, one entire kitchen wall was occupied by a rack carrying all our spices and pulses, plus a few ornaments and bits and pieces. Tim made it from second-hand floorboards that he rescued when an old shop in Dewsbury was being remodelled, and you could still see the marks of stiletto heels on the wood. This rack travelled with us and has been sitting in the cave waiting to be mounted. The slightly narrower space available, and the need for access to the water piping and electric sockets, meant a certain amount of revamping* to the structure was necessary before this could take place. But it's there! Complete with worktop and space for storage drawers underneath. At last I have access to the full range of herbs and spices, and I can cook properly again. We can sample some of the many varieties of dried bean I grew in 2009 and packed away in jars. Thank you so much Tim, it looks beautiful.

[*Ed. The revamp consisted of 2cm cut off each plank at the end to clear a plug socket and coming forward from the wall by 2cm to clear the pipes!]
Posted by Pollygarter at 13:45 2 comments: 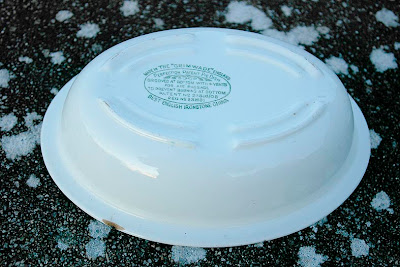 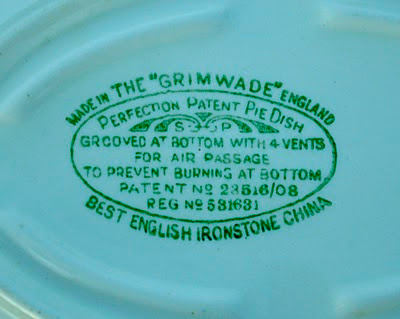 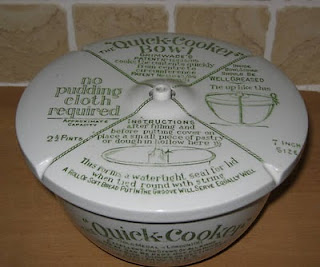 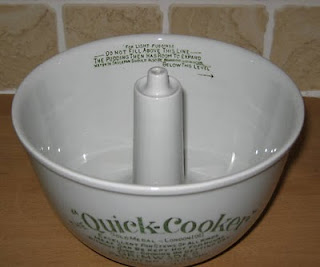 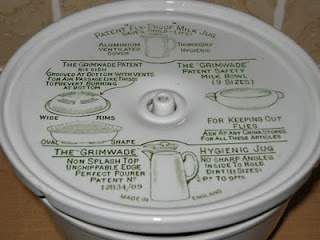 Rice pudding is a dish full of memories for me. The best of all was at school in the sixties. The fifth form girls waited on everyone else at lunch time, dragging trolleys out of the kitchens loaded with piles of plates and dishes of hot food. The rice pudding the girls ate was nothing to write home about - sweetened rice and water - but the staff always had the option of a real rice pudding as dessert. The girls on waitress duty ate after everyone else, and if there was any staff rice pudding left, there were squabbles over it. Cooked in the bottom of the oven for at least two hours, it had a hide like a rhino, a creamy texture and you could stand a spoon up in it. The real deal!

Also from my childhood - Sunday lunch always finished with a tin of Ambrosia Creamed Rice between the three of us. Pleasant, but no skin (the best bit).

Rice pudding was on the menu at the Royal Orthopaedic Hospital in Birmingham, only a few miles from my old school, when I was in for an operation a few years ago. I was really looking forward to that pudding, having not eaten for 24 hours before the operation, then being unable to keep any food down for another two days after the anaesthetic. Horror! It was sweetened with aspartame. Misery! Worst taste in the world!

At school, we girls all studied "domestic science". Everything - measures, temperatures, techniques - was exactly prescribed. It's engrained now - I find it really difficult to sling in a bit of this and a bit of that, or to measure using cups or coffee spoons. "A teaspoon" of something is 5ml, and "a tablespoon" is 15ml. These little measures come as a set, on a ring. I got my first set at the age of 11, when the manufacturers of Stork margarine gave a cookery demonstration. I still have them nearly 50 years later. Yes, I'm brainwashed. But I'm fighting it! It's rarely important for such precision to be at all necessary.

The changes in the recipe for rice pudding in our three copies of the Good Housekeeping Cookery Book (GH) reflects the changes in cooking technology over the years, and the relentless rise of the exact measure. Tim's 1954 edition speaks of "a slow oven" - no gas marks or degrees, neither fahrenheit or centigrade. I got the 1965 edition in 1969, when I went to college, entirely in imperial weights and measures and fahrenheit. The 1976 edition in the longère kitchen dates from the interim period when direct translation of imperial into metric, rather than a truly metric recipe, was the norm, with unintentionally hilarious results. So the 1976 GH recipe starts off nicely metric...
45 mls round grain rice (three tablespoons)
30 mls of sugar (two tablespoons)
568 mls of milk (a pint - come on now! I haven't got a burette, should have nicked one from the chem lab when I had the chance)
Freshly ground nutmeg
A knob of butter

Heat the oven to 150 degrees centigrade / 300 Fahrenheit (we're doing OK)
Butter a 900ml ovenproof dish (that's a 1½ pint dish, can you find a 900ml one?).
Wash the rice and put it in the dish with the sugar. Pour on the milk (that's unpasteurised full cream milk from La Borde), top with shavings of butter and grate some nutmeg on the top. Bake for about 2 hours, stirring after half an hour.

Eat on its own or with jam, honey, bottled fruit .. also delicious cold. Serves four.

PS that pie dish is a whole blog entry in itself - we have a Grimwade Patent Perfection pie dish which does the job nicely.
PPS GH has recipes for both rice pudding (baked) and creamed rice (cooked in a saucepan on the hob). Ken's scrumptious recipe for gâteau de riz is therefore based on creamed rice, not rice pudding!
Posted by Pollygarter at 15:46 4 comments: