We don't drink much sherry - we recently finished the bottle we brought with us two years ago from the UK. We didn't miss it until I wanted to make a courgette soup using a recipe that called for a small glass of sherry - for the soup, not the cook! I substituted a dry white wine - not the same but good anyway. We then added sherry (le xérès, pronounced "keres" or "gzeres" according to my dictionary) to the shopping list.

So far we have visited Leclerc, Intermarché, Super U, Simply Market and even the specialist wine shop Le-Dit Vin in Descartes - no sherry. LOADS of port, even Madeira, but so far the only place that xérès turns up regularly is in La Nouvelle République's crosswords.

That X is handy for a Mots Codés! With the aid of the letters already placed, you replace the numbers in the grid with letters in order to obtain words horizontally and vertically. A good way of learning vocabulary, if somewhat skewed...... 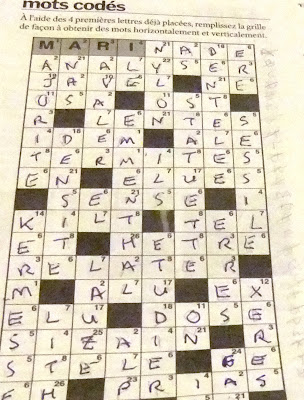 Any word with lots of e's in it comes in useful in French crosswords, so here are a few more frequent clues to be getting on with while we play "hunt the sherry".