For the first time, a plant we brought with us from Leeds has come into flower. Yes - in November. The original was sold to me as viburnum x bodnantense "Dawn". I suspect it may have reverted to one of its parents, probably viburnum farreri, as the flowers aren't as showy as the books indicate. It has pom-poms of tiny pale pink trumpets, which are scented faintly with vanilla. These appear, a few at a time, all through the winter. It has not yet lost all its leaves, which are dark green flushed with red and handsome in themselves through the summer, but it is when the leaves finally fall that the flowers come into their own. The stems form graceful arches and root themselves to form new plants if they touch the ground. Thence came our plant here in France.


It is as hardy as an old boot and will grow anywhere, although the first one I planted - before we moved in - died of thirst. This one sent up two healthy shoots last year, which are now flowering. This year it's been given the vegetable washing water, as it's just a step from the kitchen door. We'll have to make sure it doesn't get as big as its parent or we won't be able to cross the bridge!

Viburnum farreri was named after its finder, Reginald Farrer, a botanist, artist, would-be novelist and poet, who traveled through the mountainous regions of East Asia in the first two decades of the 20th century. Farrer populated the gardens of Ingleborough Hall (in "Clapham, North Yorkshire" as the Leeds railway station announcement robot insisted on calling it) with exotic plants, on one occasion by firing seeds out of a shotgun. Some of his introductions, including viburnum farreri, may be seen in Clapham to this day. You can find out more about Reginald Farrer here.

Pauline [signed in as Tim on the laptop.]
Posted by Tim at 22:02 No comments:

We have a barn full of boxes....
And amongst those boxes are ones containing beers....

I was searching for the box K39 containing the Moulinex Juicer for Susan and found a box with beers that had remained packed since leaving our cellar in Leeds.
I never found K39... it didn't exist!!
But it turned out that the juicer was in box K38... which wasn't on the list. They were amongst the last boxes to be packed and Pauline, who was attempting to supervise the contents of the boxes and record them.... was getting very frazzled!!

However, back to the beers discovered....
we decided to rescue a couple tonight.
Rescue?...
We lost a few bottles in the big freeze this February...
fortunately nothing that cannot be replaced...
but still a sticky waste!

So our evening meal was cream of pumpkin, carrot and tomato soup, bread, cheeses and beer.
Luverly!

The ones we chose were from Briscoe's Brewery in Otley, West Yorkshire.
Dr. Paul Briscoe started brewing commercially in 1998 having been made redundant... he had been brewing successfully on a non-commercial basis for years... making special beers for friends and colleagues... as well as 'special' bottled runs for the Fell Runners that Paul competes against... yes, he's a brewer with the runs!
The 'brewery' in his cellar was expanded... by using a garden shed for the messy first stages of the process, and then piping the wort down into the cellar for the fermentation and racking of the final result.
He has three 'core' brews, available in local pubs and at the Otley Beer Festival... 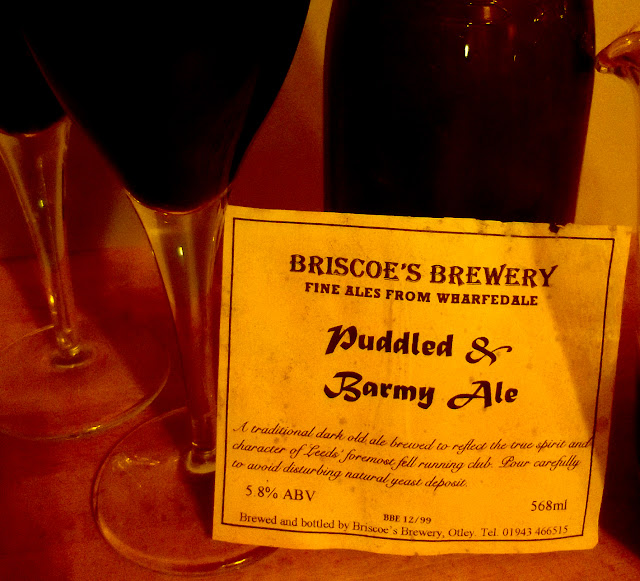 The crown cork on the bottle had rusted somewhat... and the beer poured into the jug on the flat side of petillant... so I served it in small wine glasses.... it was very nice despite being almost flat... answering to the above description perfectly... not bad for a bottle of beer that was 14 years old. It was dry enough not to be too slippery! The yeast was 'nailed' to the bottom of the bottle.

this was followed by:
Shane’s Shamrock Stout (4.5% ABV) a slightly less dry Irish-style stout with a hint of chocolate.[1999 - a special bottling for our wedding!!] 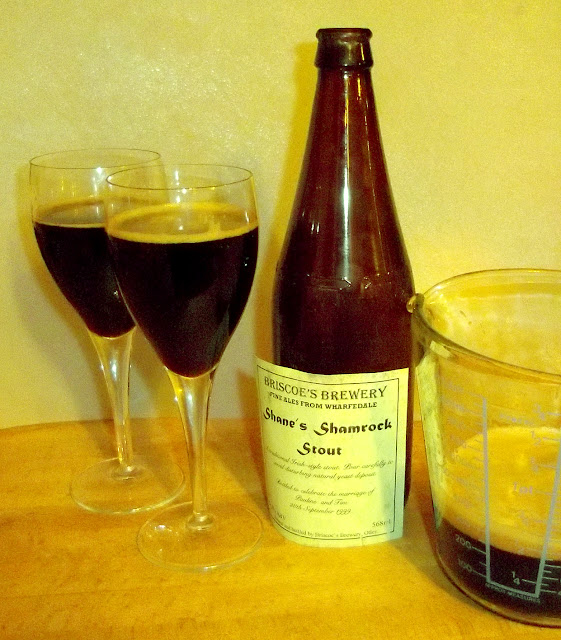 This bottle was in much better condition... and as you can see from the photograph had a good head... much dryer than the Puddled & Barmy. There is a hint of choclate...
hold on I'll just try another sip...
yes, because of the dryness, it does come across as an 80% cocoa mass bar.
[Well, if wine writers want to go all descriptive so can I...]
Seriously, I am drinking it as I type, and the flavour is of a very dry chocolate...
the beer is much dryer than Guinness.
Pauline commented that we should have drunk it on our aniversary... 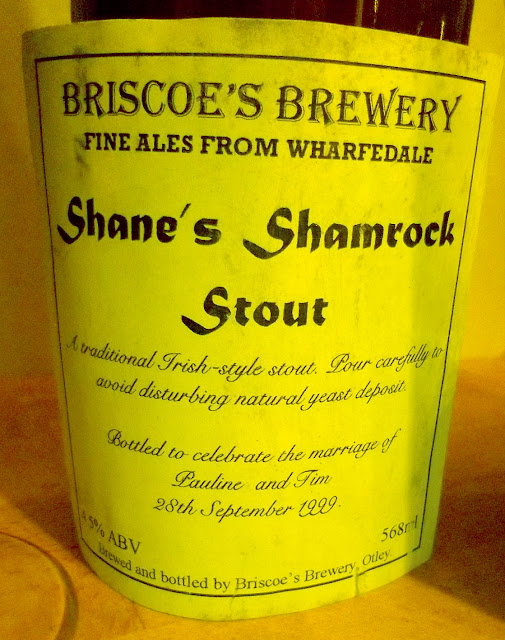 oh well....
only 40 days late...
so I'll raise a glass to the Keighley Beer Festival where we met over the Foreign Beers counter.
And now go and refill it!!
Why had these beers kept? The secret is in the bottle... both brews were on the yeast. Had the crown cork not rusted on the first bottle, it would have had a full head... not a vinho verde bubbliness.

There's a bit more about Paul's brewery here... it is somewhat out of date... the Bowling Green venture collapsed when Paul broke an arm fell running and couldn't brew... then the pub owner decided to retire and sold the pub to Weatherspoons... sadly, it is not what it was!!
Posted by Tim at 00:51 2 comments: