A whistling woman and a crowing hen

She's really gone and done it now. Vinnie the chicken crowed for the first time, to her, well let's admit it, his great surprise. And then he did it again. And again. The crowing is rather hoarse, but he got it right first time.


He's turning into quite a handsome cockerel, with a fine rosy triple comb and wattles, orange eyes, little bumps that will probably develop into spurs, a splendid ruff of neck feathers, and drooping white plumes in his tail. He was quiet while he was in the chicken house, where he does not have enough room to stretch out and give it all he's got.


They love mooching around the hangar, with its earth floor covered in sawdust, gardening compost and eons-old cow manure. In the shade of the hangar roof, the lush grass makes good grazing for them. Blanche has taken on a pale golden colour, from dust bathing on the hangar floor.

They have investigated the plants under cover for the winter, in the case of my poor Clove Pink cuttings and the globe artichokes (left) with extreme prejudice.


It's not the right time of year to expect them to start producing eggs, but they're getting to be a good size now and we keep on hoping. We really aren't ready for poussins though. We got the chooks as working animals, not pets. Well, that was the intention. The best laid plans of mice and men gang aft agley.

He really is rather handsome.

Email ThisBlogThis!Share to TwitterShare to FacebookShare to Pinterest
Labels: 2015, chickens 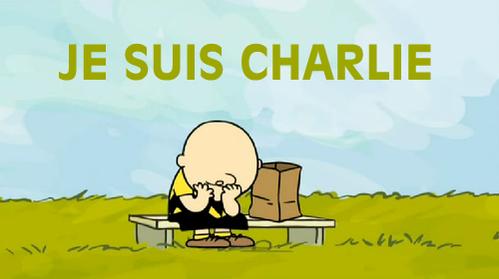 By Ian Renwick after Schultz. "I think my favourite cartoonist would approve the use of his character. #jesuischarlie "
Pauline

Chickens on the loose

The last week of December and Tim achieved his aim of clearing and digging "the Maggot" - our pumpkin / courgette / melon / squash bed - before the year end. This involved carting piles of soggy partly-decayed hay to the other end of the potager, where next year's Maggot will be, and giving the cleared ground a first go with the grelinette to loosen the soil and let the frost get in and break it up. This area will become next year's potato beds.

This healthy exercise uncovered a lot of chafer grubs (the larvae of chafer beetle species) and earthworms. We are learning more and more about chickens in general and the behaviour of ours in particular. We have discovered that they love pumpkin seeds, cooked potato, chickweed, bitter cress ... and chafer grubs and earthworms.

Tim makes a mash for the chickens every few days, composed of Grower pellets, vegetable peelings, and the cheapest possible pasta. When Tim handed out the mash on Sunday, he decided to leave the hen run door open. Tentatively the trio took their first steps outside.


From left to right, meet Vinnie, Blanche and Alice. Vinnie is developing rather fine wattles and comb, and holds his tail high in the classic cockerel posture. He has a fine ruff around his neck which he fluffs out at any possible opportunity.


The trio stretched their wings and had a good flap. As Orpington crosses they are heavy birds and need a good run-up to fly. Alice is very like her brother. They are built a lot like a true Buff Orpington, which should be a burly, solidly-built bird, but show birds of that breed are a uniform golden brown, with no white on them. Back-yard Orpingtons are built much more along Highland Games Champion lines, without the long trailing feathers. Breeding for showing has reduced the egg-laying capacity of the breed, but crosses like our three should be producing by next spring.


Orpingtons have a thick layer of fluffy body feathers which give them the appearance of wearing baggy trousers. It also helps to insulate them against the cold. We have erected a rather gaudy windbreak that we used when we went camping, to provide a little cover from the wind.


Finally Blanche, the adventurous one, always out of the run first. When our big tom cat came to investigate the newcomers, Blanche went on the attack, to Baron's surprise. She then made the mistake of turning her back on him before he had completely slunk away. But he withdrew, crestfallen.

One thing they will have to be deterred from doing is picking the buds off the raspberry canes. I'm sure they'd rather have a few raspberries, given the choice, but to a chicken brain, a raspberry bud in the beak now is worth two on the bush.