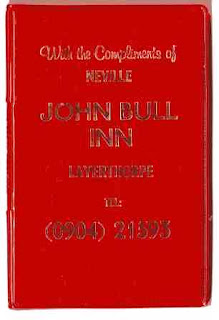 There was no juke box, no piped music, and no TV. Particularly nice was that as a female I could go into the John Bull on my own, or on one occasion with the cat in her carrying box (the vet was just up the road) and find good conversation on any topic whatsoever. Many of the regulars were staff or students of the University. This week we welcomed two of those ex-regulars to our house in France - they live less than ten miles away in Charnizay! Who'd have thought it?
Posted by Pollygarter at 17:44 6 comments: 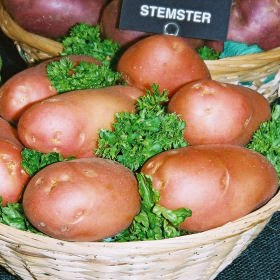 My seed potatoes are now in a cool room in mushroom trays "chitting" - allowing the sprouts, that will inevitably start now, to grow upwards and not get tangled. Studies have determined that it doesn't make any difference to the yield whether or not a potato is chitted (sprouted) when it is planted. However it won't do the poor things any good to sit in a net bag (or, worse, a plastic bag) so that the sprouts go through the mesh..... So which way up should the potato go? There are three clues. (1) A potato normally has a patch where buds are concentrated; this is called the "rose end" and the potato is positioned with this patch uppermost. (2) The root connecting the tuber to the plant often leaves a little tuft or a string. This should be positioned downwards. (3) Individual buds often nestle in a crescent shape. This should be positioned to look like a smile.
Posted by Pollygarter at 19:10 3 comments:

Off on a Junket

Junket ... is another [like fruit creams and syllabubs] of the dishes fast becoming obsolete. In the west of England, especially, this preparation of milk is still locally popular, but elsewhere there are numbers of cooks who have no idea how to make it, although the process is such a simple one that no child who has been shown the way should fail. I found this quote of 1896 from M. M. Mallock's A Younger Son's Cookery Book while browsing through Classic Cheese Cookery by Peter Graham.

Junket (in french, le caillé) is a very light curd cheese, which is basically warm milk treated with the enzyme rennet. The name comes from the Norman French word la jonquette for a rush basket (les joncs are rushes) which was used to drain off the whey from the curds. Junket looks rather like milk jelly and is usually sweetened and flavoured. Rennet (la présure) is found in the stomach lining of an unweaned calf or lamb, and its purpose is to separate milk solids (which the animal can digest) from the liquid (mostly execreted). Nowadays much rennet is of vegetable origin, such as Vegeren derived from the mould mucor mehei. Tim and I are at the latter end of a chesty cold and didn't feel anything like cooking, but I was sure I had some rennet somewhere....

As Tim was going to Perruson, he went into LeClerc to enquire if they had any présure. The customer service assistant, a lady of 'about our age', replied that they did, because she had bought some there herself. She enquired of her computer, and got a surprise. "Computer says nooooooo...." Mallock's prediction seems to have reached France, albeit a century later. Probably the wholefood shop in La Roche Posay will have some. Meanwhile, it turned out we did have some Vegeren, best before February 2003. It's an enzyme! It'll be totally defunct! What the heck, give it a try! We have some La Borde unpasteurised milk. If it doesn't work we'll just end up with a pint of sweetish vanilla-flavoured milk, and I can make rice pudding out of it.

Vegeren's recipe for Junket is:

So I did that... except that I doubled the rennet, given its age. We used our thermometer from a sommelier's kit, rather than dipping a finger as implied by the Good Housekeeping Cookery book, to test the temperature. It was perfect! A pint of milk makes enough for four to six people.

Next time I might try Peter Graham's recipe, which is basically the same, but with a different flavouring:

Warm 1 pint / 570 ml milk to blood temperature (about 37° C / 98°F, use a thermometer to be [on the safe side). Dissolve a tablespoon of caster sugar in 2 tablespoons (30ml) rum or cognac in a bowl and pour in the milk. Add 1 teaspoon (5ml) rennet - any more makes the junket taste salty - and stir gently. [I'd dissolve the sugar in the milk, much easier!] Leave the mixture undisturbed at a comfortable room temperature, i.e. about 20°C / 68°F, until set. If possible, transfer to a cool place for a couple of hours before serving. Peter Graham recommends serving this with clotted cream sprinkled with freshly ground nutmeg or cinnamon.