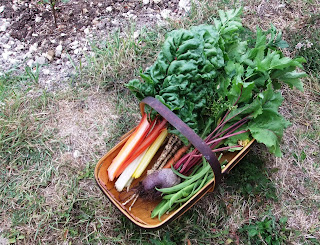 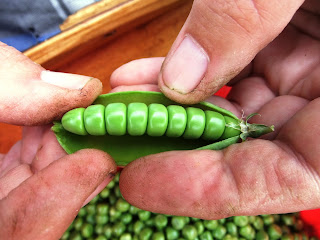 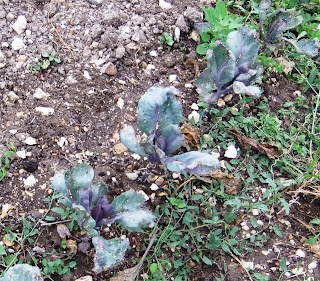 The kales I planted recently are looking quite strong, and I hope they may do better. Red Russian Kale is a wonderful vegetable, highly decorative as well as excellent to eat, but I had to order it from the UK. Kings came up with the goods, bless them! Black Tuscan kale, by contrast, was on sale among the bedding plants at the Point Vert in Loches.
Posted by Pollygarter at 18:39 1 comment:

My poor "Jermor" shallots, planted in November and just about ready to lift, were infested with the grubs of onion fly. The first signs were a yellowing of the leaves, which is also a sign of the shallots being ready, but when I lifted a sample of the yellowest, the bulbs were rotting from the neck downwards. There were signs of little white grubs (mostly dead) and a few pupae.


According to my gardening books, this little perisher emerges from pupae in the soil in May, but I suspect that it was earlier this year because of the warm weather. The organic treatment is netting to prevent the flies getting to the leaves, and of course growing alliums (onions, garlic, shallots, leeks) in a different place every year, cultivating the soil well so that the birds can get to the pupae.

I'm sure I have had such infestations back on the allotment, but never with the same effect. But then there was so much onion white rot that I often lost 50% or more of the harvest. Some plotholders didn't bother to grow alliums because of the losses. White rot is a fungus, and its spores can remain active in the soil for thirty years. No white rot here! It can only come in on infected sets - moral, don't plant supermarket shallots or garlic!

The grubs have not in themselves done much damage, and most of them are dead, but rot has taken hold where they have been working - just above the neck of the shallot - and unless I cook or freeze the bulbs immediately I will lose the lot. For that reason I'm making some more shallot confiture. I'd have made that anyway, but not with green shallots, so it'll be interesting to see if there's a difference.

The garlic and onions are also affected. I've lifted the garlic ("Germidour") and found tunnels and pupae, but not the rot, as yet. The garlic harvest is magnificent, with large, even-sized heads and decent-sized cloves.


The wounds caused by the grubs have scarred over, so I've hung the dried bulbs in bunches in a cool place away from the mice.
Posted by Pollygarter at 18:57 3 comments: