This product may contain nuts

Those people who incite others to gather nuts in May are deeply suspicious and undoubtedly up to no good. Whatever they find in May will not be nuts. A few empty shells with tiny toothmarks, maybe, but the time to gather nuts - cobnuts, filberts, hazelnuts - is September. Last year we blogged about our cob and filbert nut bushes here. Since then we learned that our Halle'sche Reisennuss (Hall's Giant filbert) is by origin a French variety from Alsace which should be known as Merveille de Bollwiller. 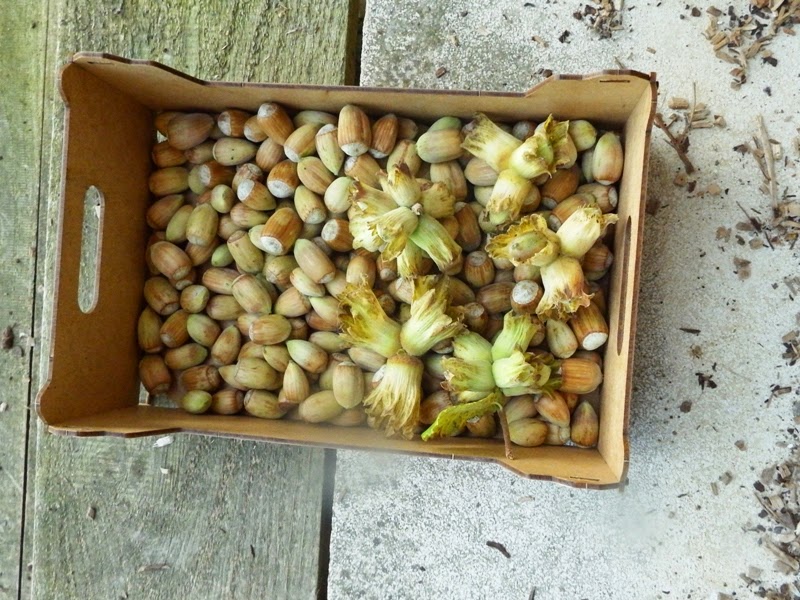 We stored last year's nuts in net bags in the cellier, and they kept very well. We ate the last ones so that the bags could be used for this year's crop, and the kernels were somewhat shrunken, but sweet and still palatable.

After last year's crop of almost a kilo from seven bushes, this year we harvested getting on for four kilos of fat filberts. Some of the nuts are huge - typically the big ones come from the tip of a branch.


The ratio of duds to good'uns is very low this year. I have carefully removed each little skirt  (husk), and chucked out any nut that
When you open nuts like these, you find a hollow with some brown withered shreds inside - that is, unless there is or was another occupant. I will spare the gentle reader that unpleasant sight.

At this time of year, the fresh nuts are crisp and tasty. Dad's old nutcracker opens them to perfection.


To remove the slightly bitter inner skin from hazelnuts, after removing the shell and any pieces of brown stuff, drop them into boiling water for a minute, then peel. Another way is to roast them lightly then fold them into a clean tea towel. Give the nuts a vigorous rub. For toasted crushed hazel nuts, whirl them around in a heavy frying pan over a medium heat until they are as brown as you like, then run them through a food processor or coffee grinder.

There are lots of lovely nut recipes around, particularly those involving pears and goat cheese, substituting hazel nuts for walnuts.

For absolutely wicked sweeties with hazelnuts in, see Hugh Fearnley Whittingstall's recipe for hazelnut chocolate bars  in the Guardian of 8 September 2007. This involves melting 150g of dark chocolate (70% cocoa minimum) with 100 ml of double cream (I used La Borde crème crue), 25g soft brown sugar, a slug of runny honey, 100g of toasted chopped hazel nuts and a pinch of salt, in a bowl over a pan of gently simmering water. Turn off the heat as soon as all the ingredients are in. Once the chocolate has melted, stir the mixture lightly and take the bowl off the pan of water. Moisten a 20cm x 25cm baking tray with cold water, and line it with clingfilm. Pour the chocolate mix over the clingfilm and tap the tray briskly to level the mixture. Allow to cool to room temperature then draw a grid on the surface of the chocolate with a sharp knife, showing where you want to divide up the sweeties - one inch squares are good, and dirty great big lumps even better. Place the tray in a refrigerator until the chocolate has set. Turn out the tray onto a cutting board and remove the clingfilm. Cut into bars. Serve dusted with cocoa (use a tea strainer) with coffee, or just pig in. Warning - STICKY and INCLINED TO MELT!! Keep refrigerated until ready to serve.

Sorry no pictures - we took them to Gaynor and Tim's retirement party where they tended to stick to people's fingers and they all disappeared.
Posted by Pollygarter at 10:55

Thank you.
They were delicious and certainly didn't last long. Very moreish!

Interesting info, makes me want to try and find some of our hazelnuts, which we have lots of here, but wild animals and our domestic livestock always manage to get to them first!

Vera...
just keep those pigs away from the nuts!!

Seriously, Pauline picked these when they were still very slightly green...
the other critters haven't recognised that they are ready...
same thing with our redcurrants...
all went...
the whitecurrants, Blanka, didn't...
the critters didn't think they were ripe.

Does the rhyme refer to picking green walnuts for pickling? A rather english food with an acquired taste, great with a packet of crisps! That said I think your more likely to gather them a little later in the year.

To blanch hazel nuts
1 - 2 cups nuts
4 cups water
4 tbs bicarbonate of soda
Bring the water to the boll
Add the soda, then the nuts
Boil for 3 to 4 minutes
Drain into a colander and plunge the nuts in cold water or run them under a cold tap

Hint after 3 minutes test one nut under the tap is its skin loose?