This has been the year when I started to love roses, and two roses in particular have stood out for us. I still consider blue roses to be monsters in their zombie-flesh colours, and  I still haven't time for either scentless roses or fancy orchids. But these two varieties were something special.

This is the second year we've been to Chédigny, the village where the rose is queen, and almost every house has its carefully labelled plants. But it's the first year that we have been to the Chédigny Rose Festival, at the beginning of June, where in spite of all the visitors you can see the roses. Here we discovered Jeanne de Chédigny, a rambling rose named in honour of one of the most respected members of the community, Jeanne Louault. This lady was named as "one of the righteous among the Nations"  alongside her late husband Bernard, and their names were inscribed on the Hill of Remembrance at Yad Vashem in Israel for their courage in protecting two German-Jewish teenage boys in occupied France in 1940. The two boys,  Franz (Francois) and Ernst (Ernest) worked on the Louault family farm for eighteen months, hidden in plain sight. Then someone must have denounced them. When a squad in a German army lorry came to arrest them, Ernst was caught but escaped, and Franz got clean away. The brothers joined the Resistance. When Jeanne's name was suggested for a rose dedicated to Chédigny, the fact that her son was mayor at the time was just a happy coincidence.

As for Jeanne de Chédigny the rose, « elle est très simple, avec beaucoup de fleurs, de couleur rose pale, entre le rose et le blanc, comme des fleurs d'églantier », a very simple rose, with a lot of flowers, pale pink in colour, between pink and white, like wild rose flowers. It has plenty of perfume, and scrambles happily over a line of posts at the entrance to the village. 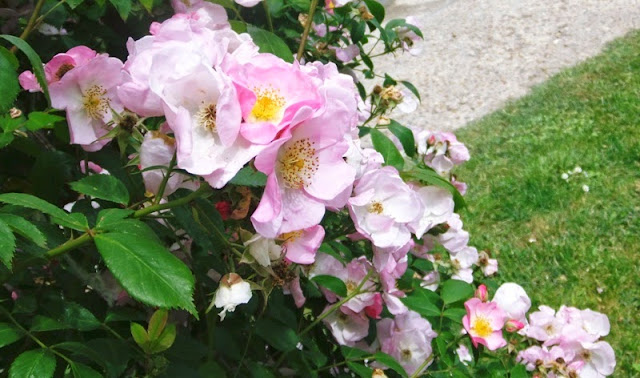 The other rose, appropriately enough, is "Peace". This was blooming in the front garden just over a week ago. We inherited this bush when we bought the house and we have no idea how old it is. Knowing that cold and wet weather was forecast, we picked the last two buds and put them in a vase in the kitchen. This is the result.

A lovely sentiment and a beautiful rose with which to enter 2015. We can but hope...

I agree with the above! Thank you for the lovely photos and message.

No roses here, but hope to remedy that situation soon. Loved the Peace message.