A basket of clementines

The 2 kilo basket of Corsican clementines, each still decorated with a couple of leaves, looked charming.
The fruit tasted superb, fresh and sharp, with a background sweetness.
The following morning they were still fine, but it would not be possible simply to eat them till they were gone without losing more than a few.
Find a recipe - already got clementine marmalade - aha! Recette Clémentines confites!

This recipe comes from Le Journal des Femmes (aka Women's Journal) with a stack of comments and queries, mainly on three subjects:
(1) how much fruit do you use,
(2) I can't find glucose syrup, can I use anything else, and
(3) why have my fruit collapsed / shrivelled up (three different french verbs, all meaning roughly the same thing).
I have tried to incorporate the responses and my own experience.

Firstly, the picture illustrating the process told the story:
you need enough fruit to cover the bottom of your pan in a single loose layer.
I had 18 fruit, but found one of them later uncooked, still on the table.
Note you will not be able to use this pan for a fortnight.
Secondly, you must include glucose syrup, there ain't no substitute.
It stops the sugar crystallising out / turning to jam.
Thirdly, choose fruit just coming to the peak of ripeness, and once cooking begins, handle it as little as possible.
Don't pile one fruit on another until the bottling stage - keep them in a single layer.
I used a deep melamine slotted spoon to lift the clementines in and out of the cooking liquid, which was ideal;
a silicone one would be good if you can find a small one about the size of, well, a clementine.


Method
1. Wash the fruit, prick them deeply several times with a fork.
Place them in the bottom of a large pan in a single layer.
Cover with water, bring to the boil and cook gently for 15 minutes.
Drain the fruit, retaining the cooking liquid.

2. Place the fruit in a large pan with a lid, that you won't be needing for a fortnight.
Measure the cooking liquid. You will need to sums here!
Add 500g granulated sugar and 200g glucose syrup per litre of cooking liquid.
Place on a medium heat and bring to the boil, stirring until the sugar has all dissolved, then turn up the heat.
Remove from the heat at the first decent bubble.

3. Pour the syrup over the clementines.
Put a big plate on top of the clementines to hold them under the surface of the syrup; otherwise they will float.
Put on the lid and leave in a cool place for two days.

4. Two days later (D+2), pour off the syrup, add 100g granulated sugar per litre of the original cooking liquid.
Bring to the boil, stirring to dissolve the sugar.
Pour the boiling syrup over the clementines.
Put on the lid and replace the pan in a cool dark place.
Leave for another two days.

6. D+14: place the fruit in storage jars and cover with syrup.
Handle them very gently as they are extremely tender at this stage.
Six fruits fit nicely in a 500ml Le Parfait storage jar. 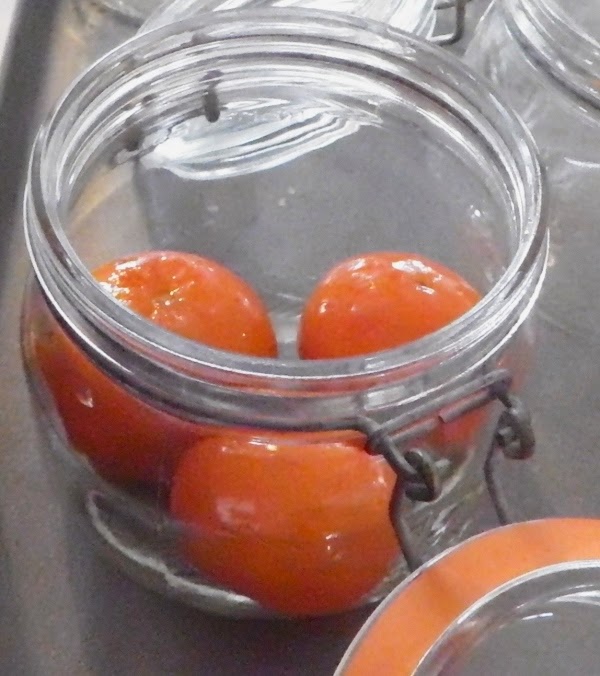 Save any remaining liquid in a sterilised glass bottle with a good cork or stopper.
It makes a delicious cordial, with lots of ice and some fizzy water.

To make glacé clementines, drain the fruit for 24 hours (don't waste the syrup!), mix icing sugar with a little of the syrup, dip the clementines in the mixture and put them in a hot oven oven for a few minutes to dry off.
Alternatively the fruit can be dried in a food drier for four hours.
I'll have a go at this after they have matured for a month or so.

Email ThisBlogThis!Share to TwitterShare to FacebookShare to Pinterest
Labels: 2015, clementines

Definitely a labour of love, one that needs careful planning and dedication - plus the knowledge that you will be in the same house/country for a fortnight!
One day I will have time to do something like this...........