The last vegetable we expected to do well in our stony soil was carrots. Stones are one of the reputed causes of "fanging" - forking into lots of little roots instead of one nice big one (another is fresh manure). Imagine our surprise when fine fat straight carrots emerged from the soil!

There was very little damage from carrot fly, too. This again was a surprise, as one of the commonest meadowland weeds around here is the wild carrot, daucus carota. Thinking about it though, the carrot fly population will be in balance with its natural predators, so the same level of damage - almost nil - as that of the wild carrot should be expected. The wild carrots come up with long slim white roots with a lovely aroma of carrot, though rather tough and not much taste.

This year we grew a French variety called Nantaise améliorée 3, available in the UK under the name "Early Nantes Improved". The "early" tag of this tasty stumpy-rooted variety means that it has a short growing season, enabling us to grow two crops in a year. The May-sown row suffered in the drought, despite watering, but we still got a few meals out of them. We sowed again in late July, on ground previously used for onions and shallots. The second sowing has benefited firstly from the rain and then from the Indian summer we are experiencing at the moment. They are producing an excellent crop and the next cake could well be a carrot cake. 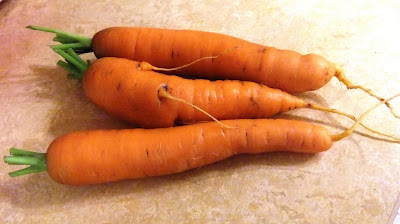 We are also growing January King, a hardy favourite from England which we have grown for many years. They are also doing well. Carrot fly mined our former allotment crops into inedible black-and-orange mush, until we started growing under mesh, so thank you, nature's balance!
Posted by Tim at 13:47

Email ThisBlogThis!Share to TwitterShare to FacebookShare to Pinterest
Labels: carrots

I have only planted carrots once and they were hopeless. I decided it was easier to buy the few that I need. Yours look good well done. Diane

Thanks Diane. Two have just gone into an Oxtail pot-au-feu... give us tonight's meal with Red Russian kale and King Edward spuds.... and a soup tomorrow.

Our carrots were hopeless last year and I gave up. Everything with us is down to lack of water though I think - although Edouard did warn us that we wouldn't do well with carrots or beetroot in our soil.

Because he hasn't you mean! We used to get good results on things our fellow allotment holders said wouldn't work... 'cos we did different!!