Today I picked the last of the Cylindra beet (betterave), sown at the end of March and eaten (or given away) one or two at a time over the summer and autumn. The first one was picked on 24th June, so that's exactly five months of good eating. Not one went "woody" (turned into something resembling a piece of tree) or bolted (sent up a flower spike, rather a shame in a way as beetroot in flower can be spectacular).

Here's one we ate earlier, along with some carrots and parsnips. 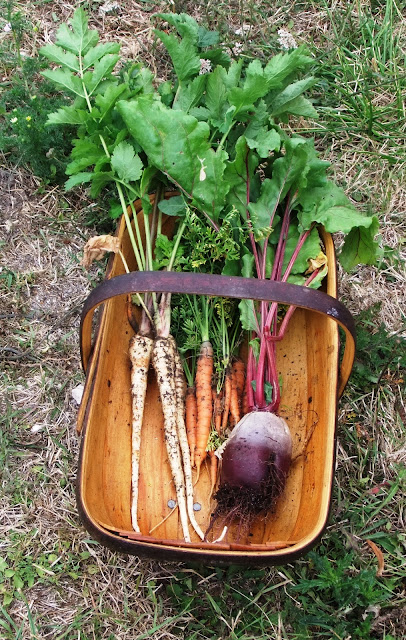 I sowed the seed in a tray and pricked out the resulting 21 seedlings into modules at the end of April, then planted them out in mid-May. Beetroot seed are "polycarpic" - they come in little clusters and you always get multiple seedlings from one lump, so you have to thin out over 50% if you sow direct into the ground (or else buy a variety called Monodet which is monocarpic and expensive). I hate to throw away seedlings I've brought into the world myself - it makes me feel like I'm murdering them. Cylindra are firm fleshed, a deep purple and, as the name would suggest, cylindrical in shape rather than "round or globe", as the allotment show schedule used to have it.

We bake them combined with other vegetables such as pumpkin, or microwave them in a lidded Pyrex casserole with a little water for 8-15 minutes depending on size (the biggest, which weighed nearly a kilo,  took 20 minutes).

I also pickled some beetroot (variety Boltardy this time, which are round). Tim doesn't like "shop" pickled beetroot which he finds much too vinegary and catches in his throat. I therefore tried Miles Collins' recipe, which suggests a little sugar. This single thread has been going since September 2007 and has lots of additional tips and fine adjustments. I added a bay leaf, white peppercorns, coriander seed, a cinnamon   stick and a star anise to 500 ml of white malt vinegar, plus four tablespoons of sugar, boiled it up, allowed it to cool then poured it through a sieve over the cooked, peeled and sliced beet in a Le Parfait jar. The pickle has now had two weeks to mature so we sampled it. I think it's excellent. Tim rates it as "better than any pickled beetroot he's ever had" but he's still not a fan. All the more for me!
Posted by Pollygarter at 22:55

As one of the happy recipients of your beets I would like to say how delicious they have been. I did some as 'hummous' and some in a walnut oil and sherry vinegar vinaigrette. Simon doesn't like beetroot either, so all the more for me too!

We are just starting to pull our beets that were planted as a winter veg. My husband does not like cold beetroot, so I usually cook and serve them hot, sweet and sour. yum yum. Diane

Susan, Diane,
What is it with men and beetroot? Is there an anti-beet gene on that Y chromosome? Or was there some self-help book for mothers that said "If you have a boy child, force feed him beetroot till he screams for mercy"?

It isn't a beet hating gene... it is a raw vinegar hating gene! I hate sour beer!! I don't even like vinegar on my chips [much prefer mayo or Heinz ketchup]!!! I'm not a great fan of HP Sauce either... 'cos it is too vinegary.... but it is a superb addition to stews.
I've asked Pauline to try the same recipe with Cider vinegar and a little more sugar.
Tim [as Pollygarter - didn't bother to logout and logbackin!]